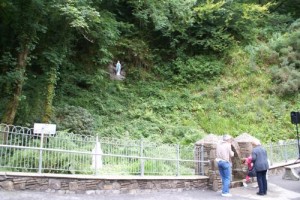 In memory of a supposed Marian apparition 30 years ago this month, Melleray grotto outside Cappoquin in West Waterford, is celebrating with a week of prayer and remembrance.

A benediction of the Blessed Sacrament took place on Saturday last, followed by prayers with Fr Thady Doyle, and a candlelight procession accompanied by the Mellerary Grotto Choir.

Throughout the week and the upcoming weekend, prayers will be said each evening, led by a host of local priests, including Fr John Kiely, Cappoquin, Fr Shane O’Neill, Knockanore and Fr Bobby Power, Ardfinnan.

The supposed Marian apparition took place in August 1985, during what is known as the moving statues phenomenon in Ireland. Along with Mount Melleray, the Blessed Virgin Mary was reported to have appeared in Ballinspittle in Cork and similar occurrences were reported at around 30 locations throughout Ireland.

Ursula O’Rourke was 16 at the time of the supposed apparition in Melleray, and was among a number of people who claimed to have seen Mary, including a local farmer and two schoolboys.

The Catholic Church remained reticent on the apparitions, with one describing them as nothing more than illusions. According to Catholic Church doctrine, the era of public revelation ended with the death of the last living Apostle.

The grotto itself was erected in 1981 by Fr Celestine, a Cistercian monk in Mt Melleray Abbey. Hundreds of thousands of people have visited the grotto in Mount Melleray from around the world over the past 30 years.

Celebrations at the grotto continue daily througn until Monday, August 24th, while on Saturday, September 8th Our Lady’s birthday prayers will be held at 8.30pm, with a candlelight procession at 9.30pm.